How do you know when spring has begun? Is it the appearance of the first tiny leaves on the trees, or the first crocus plants peeping through the snow? The First Leaf and First Bloom Indices are synthetic measures of these early season events in plants, based on recent temperature conditions. These models allow us to track the progression of spring onset across the country.

How does this spring compare to "normal"?

Spring leaf out continues to spread up the country, three to four weeks earlier than a long-term average (1981-2010) in parts of the West, Southeast, and Northeast. Buffalo, NY is 5 days early, Detroit, MI is 2 days early, and Sioux City, IA is 1 day early.

Check back on this page throughout the spring for updates on when spring arrived and whether spring was early or late for your location.

Download static maps of Spring Leaf Out and Spring Bloom.

Download the maps in KML/KMZ and other formats via our Geoserver Request Builder Tool.

How often do we see a spring this early or late? 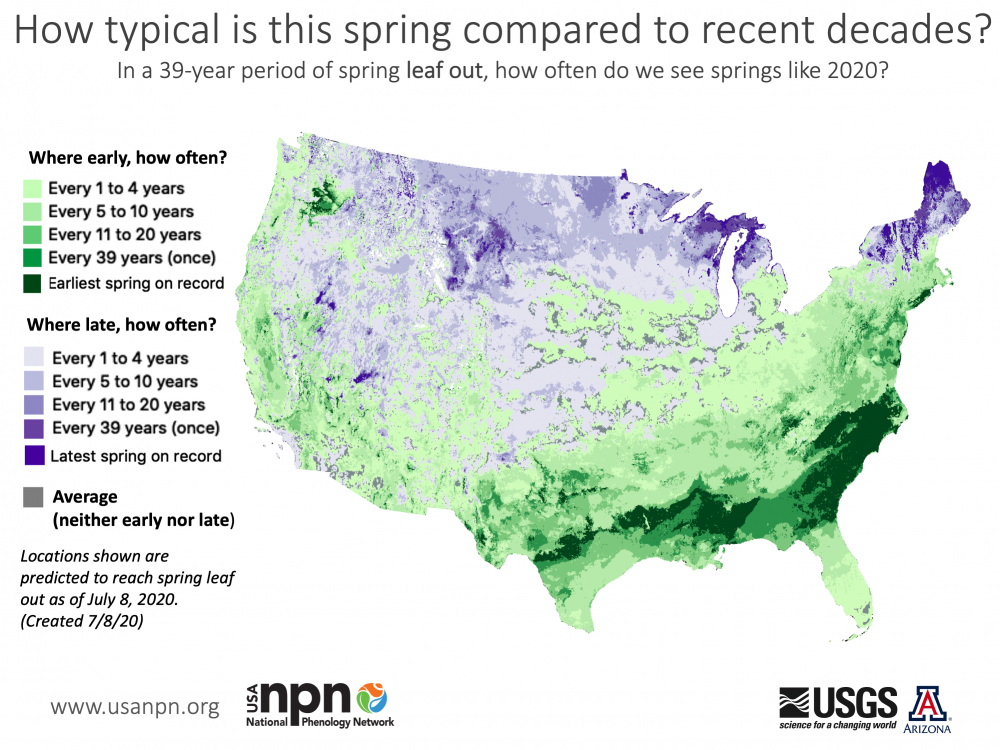 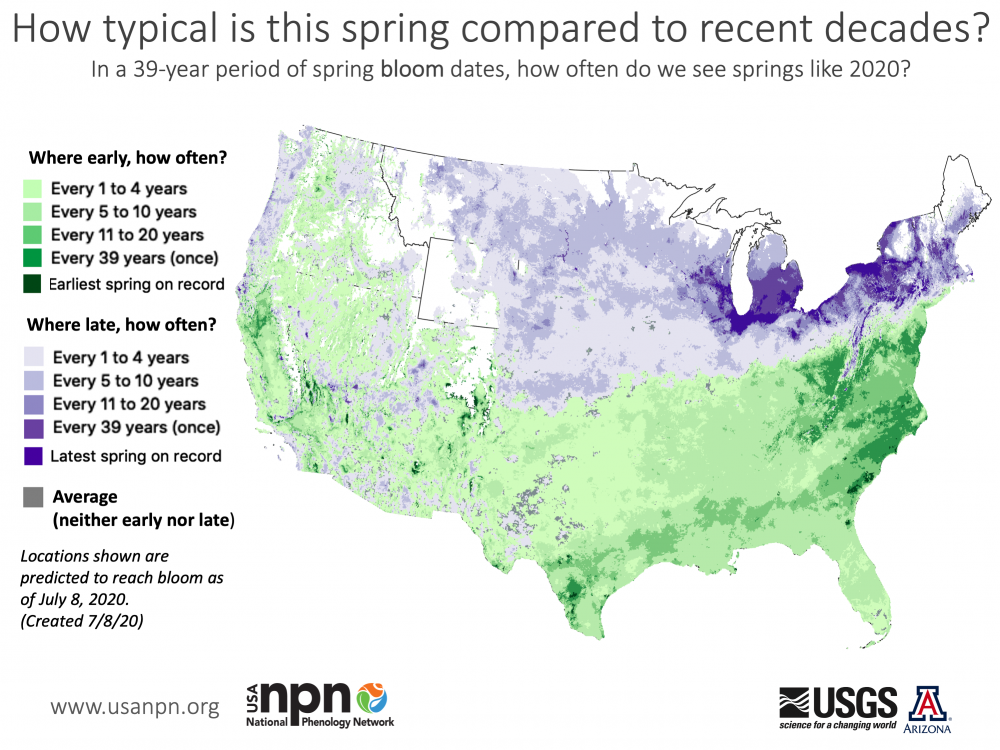 In places where spring has sprung, how typical is this year’s spring? Darker colors represent springs that are unusually early or late in the long-term record. Gray indicates an average spring.

In parts of the Southeast and Northwest, this year's spring is the earliest in the 39-year record (dark green).

When did spring arrive at locations across the country? 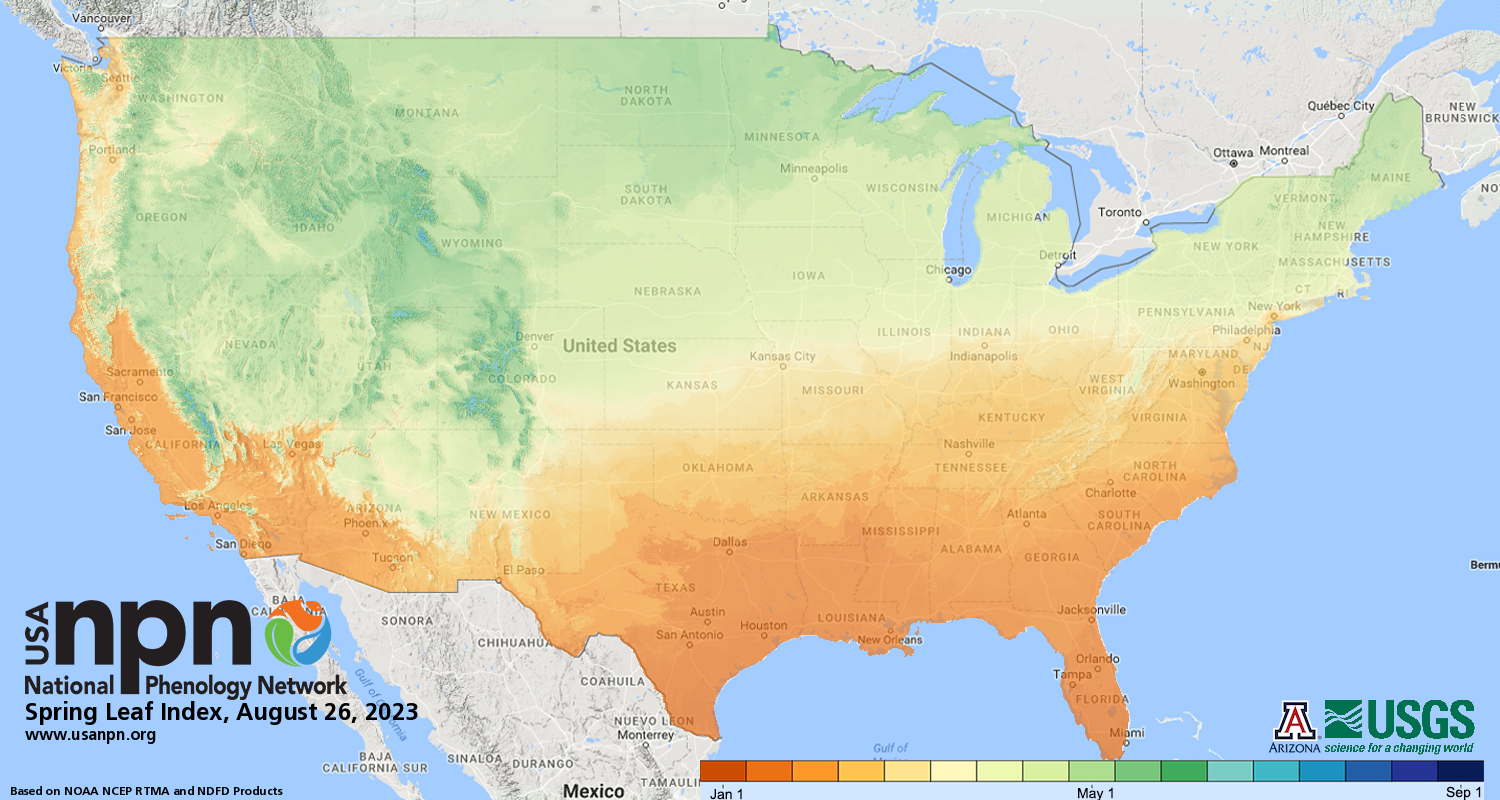 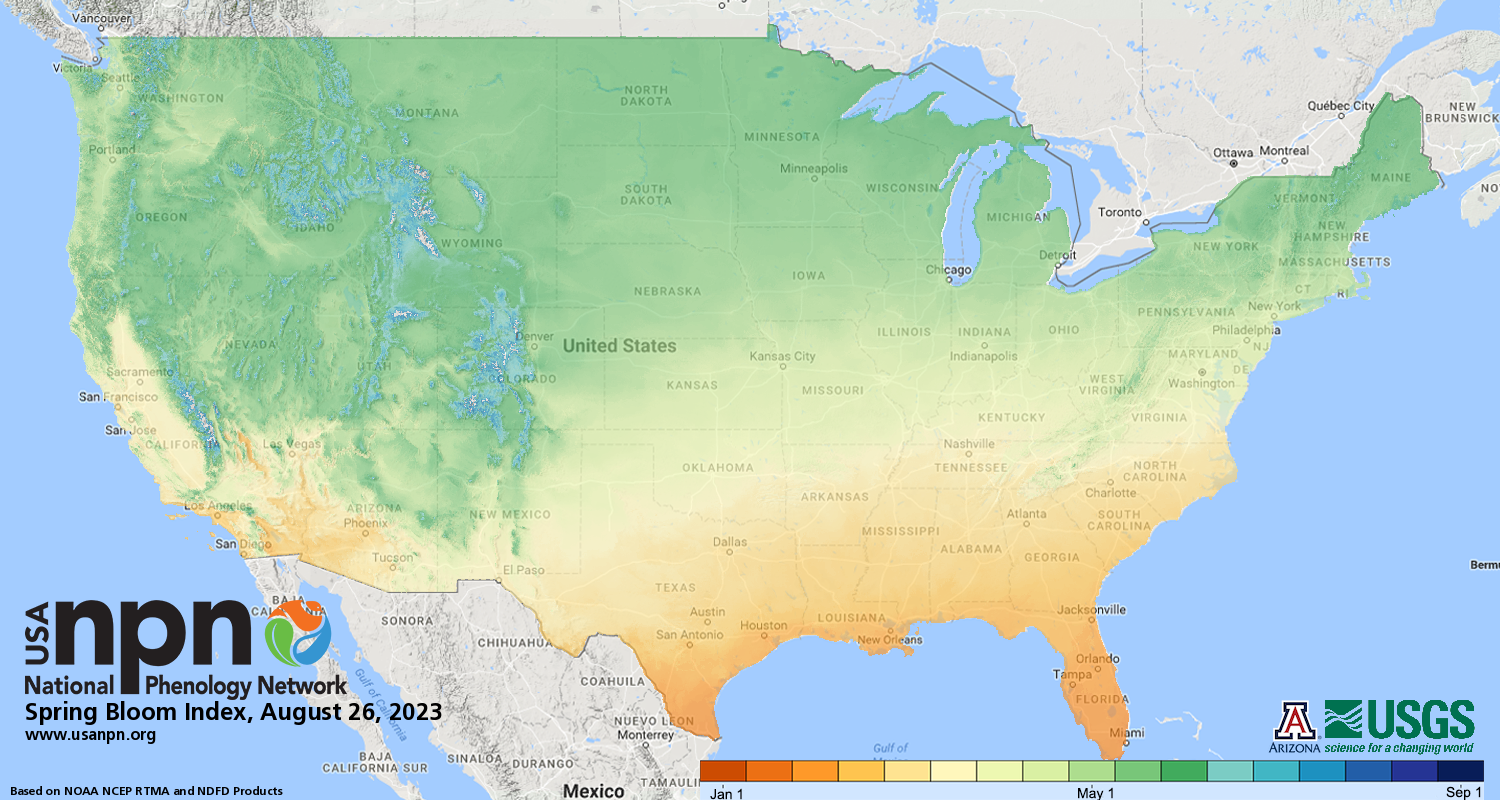 The First Leaf Index map at right shows locations that have reached the requirements for the Spring Leaf Index model so far this year.

Learn more about the Extended Spring Indices and the data products available.

What is behind these maps?

The Extended Spring Indices are mathematical models that predict the "start of spring" (timing of leaf out or bloom for species active in early spring) at a particular location (Schwartz 1997, Schwartz et al. 2006, Schwartz et al. 2013). These models were constructed using historical ground-baesd observations of the timing of first leaf and first bloom in a cloned lilac cultivar (S. x chinensis 'Red Rothomagensis') and two cloned honeysuckle cultivars (Lonicera tatarica 'Arnold Red' and L. korolkowii 'Zabelii'). These species were selected because they are among the first woody plants to leaf out and bloom in the springtime and are common across much of the country.

To determine how the current spring compares to “normal”, we difference the day of year the leaf out or bloom was reached this year from the long-term average (1981-2010) day of year it was met. Long-term averages were calculated using PRISM Climate Data daily minimum/maximum temperature data (Oregon State University).

To calculate how often we see a spring as early or late as the current spring, we compare the current year's Spring Index Anomaly value to the anomaly values from 1981-2019. We determine how often a spring was at least this early (or late) by taking the 39 years in the record divided by the count of years that were earlier (or later) than the current year.

Re-use of Maps and Data

Content, maps, and data accessible via usanpn.org are openly and universally available to all users. USA-NPN is not responsible for the content or the use of the data. Content may be re-used and modified with appropriate attribution (e.g., "source: USA National Phenology Network, www.usanpn.org"). See our complete Content Policy and Data Use Policy.

What is the difference between First Leaf and First Bloom?

The First Leaf Index is based on the leaf out of lilacs and honeysuckles, which are among the first plants to show their leaves in the spring. This Index is associated with the first leafing of early-spring shrubs and other plants.

The First Bloom Index is based on the flowering of lilacs and honeysuckles. This Index is associated with blooming of early-spring shrubs and leaf out of deciduous trees.

See how the First Leaf and First Bloom predict activity of native trees and shrubs.

Your observations of leaf-out and flowering in cloned and common lilacs as part of Track a Lilac and the Cloned and Common Lilac Campaigns are used to determine if these predictions are accurate. Help out by sharing valuable observations of your plant! 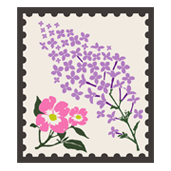